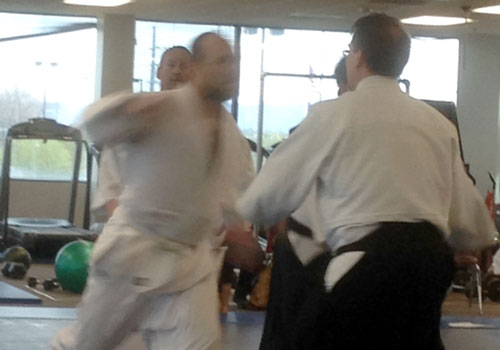 The world can be a pretty scary place, and it’s a good idea to learn how to defend yourself. We’re constantly hearing in the media about the latest mass shooting or terrorist attack. So it’s a natural reaction to ask yourself, “What would I do if I were in that situation?” Of course, these incidents are rare, and it’s more likely that we would be struck by lightning than be involved in such an event. Still, this is a good question to ask: what would you do if faced with a stressful, dangerous, or even life-threatening situation?

One of the reasons for martial arts training, and why we teach and train Aikido in Salt Lake City, is to help people to become better prepared to face a dangerous situation. The reality is much more complicated than that. We don’t train martial arts just to learn technique—how to punch, kick, or subdue an opponent—we train Aikido to learn how to face stress and danger and not be overwhelmed by it.

The familiar response to stress is fight or flight. Depending on your personality and the situation you are in, you may instantly go into fight mode—try to beat whatever is causing you stress into submission—or flight mode, where you try to get away from it as fast as you can. The third response, or freeze response, is perhaps the most dangerous. Unable to decide whether to fight or run, your mind shuts down, leaving you paralyzed and unable to do anything. In a life-and-death situation, this can be fatal. But even in our daily lives, this can be a troubling reaction to stress, when your mind goes blank at a critical moment like during a test, a job interview, or a work presentation.

So how can training Aikido help you overcome this tendency to freeze under pressure? Essentially, it’s this: training Aikido (as well as many other martial arts) can teach you to shorten or eliminate the freeze response altogether by systematically training yourself to keep the thinking mind clear and active during high stress situations. There are different ways to do this, depending on the martial art. Many styles practice sparring (fighting in pads). In Aikido we train jiyuwaza (freeform attack and defense), which is similar to sparring but non-competitive, and randori (defense against multiple attackers). The grueling experience of testing for rank advancement also subjects Aikido practitioners to a high amount of stress. In all of these situations, it’s common for the mind to go completely blank and all techniques to go out the window. If you don’t freeze the first time you are asked to perform jiyuwaza, you are the exception to the rule.

Over time, regular Aikido training does a couple of things: 1) it helps to develop muscle memory—the automatic response that allows your body to respond in a certain way without the need of conscious, directed thought, and 2) it helps you to develop the ability to keep the mind clear and calm even during stressful situations.

The Japanese call this state of mind heijoshin. It basically means keeping your mind in a normal state in any situation so you can make the right decisions. When combined with the muscle memory developed through consistent martial arts training, heijoshin allows you to face any situation—even highly stressful or dangerous ones—without freezing or losing your head.

This state of mind saved Aikido founder Morihei Ueshiba’s life in a well-documented incident in Mongolia in 1924. His party was attacked by bandits as they were traveling through a mountainous pass. He described his experience as follows:

I couldn’t move away, so when the bullets came toward me, I would twist my upper body away to avoid being hit. As I sharpened my vision, I became able to sense clearly the direction from which the bullets would come. A split second before the bullet, I would see a white flash—and if I moved away from the white flash, I could avoid the bullet. This happened every day, and in a natural way I was able to unfold the innermost secret of the martial way: the more you can maintain a calm and empty mind, the better you can reach out and sense the intention of your opponent.1

Obviously, this has great value in a life-threatening situation, but it can also be applied to any part of your life. It can increase your confidence at work and the value of your decision-making at critical moments. It can improve your relationships by helping you learn to better control your reactions. Heijoshin is a mental manifestation of aiki, the harmonious power of life that is the essence of Aikido. We learn how to face any situation, accept it, and use it to benefit ourselves and those around us.

If you’re interested in learning how to be prepared for anything, we invite you to join us for training at Aikido of Salt Lake, or visit your local Aikido dojo. Training Aikido will not only teach you how to defend yourself, it will help you learn to face all of life’s challenge with a calm and clear state of mind.