This article is in response to the published results of the Aikido Journal survey about the “Future of Aikido” that the broader Aikido community participated in after Stanley Pranin’s passing in March 2017. Our response is based on our own practice of Aikido since 1980.

By way of introduction, our organization in Brazil, the Maruyama Institute, received official recognition from the Aikikai Foundation, Aikido World Headquarters, in May 2015. We also have a philosophical and technical affiliation with Masakazu Kitahira Shihan, 8th Dan, of Hiroshima, Japan. The Maruyama Institute is led by Roberto N. Maruyama, 7th Dan, of São Paulo, Brazil. Our organization has about 900 practitioners training in approximately 30 dojos in Brazil and a satellite dojo in Salt Lake City, Utah, USA.

The Aikido Journal survey results points to two concerns in the Aikido community: the effectiveness of Aikido techniques and the relative decrease in youth participation in Aikido training. We believe that Aikido can be effective if allowed to evolve to reflect today’s ‘martial’ context, and that when that evolution occurs, we observe a growth of interest from the younger generation.

Maruyama Sensei’s personal experience led him to evolve his Aikido. He worked for 28 years in finance for French multinational firms until he was 52 years old. Then he decided to radically change his career trajectory by participating in the selection process to become a police investigator in 1997. He was accepted into the force and was assigned to the GOE (Grupo de Operações Especiais or Special Operations Group), a 180-man force created to support the 90 police stations in the city of São Paulo. The GOE was only called upon for high risk operations. During these operations, he was constantly deployed in the streets of São Paulo. Armed with a 5th Dan in Aikido, he started using Aikido containment techniques in real-life situations. The traditional method of Aikido training, which involves meeting the energy of an attack, was useful in these encounters, but only in part because other energies—which can be described as negative energies—were also present. These negative energies, such as resistance to the technique or attempts at escaping from it, made the effective application of traditional Aikido techniques difficult.

After 7 years, he was invited to become self-defense instructor for the GOE, a role he retained until retiring in 2014. The police academy trainees often had previous martial art experience (such as Judo, Mai Thai, Kick Boxing, Brazilian Jiu Jitsu, etc.). This further tested his application of Aikido principles. He was forced to find practical solutions within the principles of Aikido as taught by O Sensei. For example, Brazilian Jiu Jitsu (BJJ) aims at taking the adversary to the floor. So faced with a BJJ practitioner, we must avoid being taken down at all costs. And when it does happen, we must use every recourse to escape from being immobilized. One practical solution, compatible with the Aikido principle of self-preservation, is biting the adversary’s leg. This tactic is forbidden by BJJ competition rules. However, Aikido is not a competitive sport that is limited by regulation. Rather, it is based on core fundamental principles, one of which is self-preservation.

Understanding these principles opens the framework of traditional Aikido training. Consequently, we can see Aikido as a wider set of practices than just martial art techniques. In competitive martial arts, one artist is better than another when he or she wins a competition. Who is better in Aikido? Competing in Aikido is meaningless except against yourself, which is a different viewpoint altogether. People differ so much that there is no objective way to declare a winner when there is no competition.

This brings us to: Aikido as the Way of Peace.

The concept of Budo is central to martial arts. The suffix “do” is common to several styles, such as Tai Kwon Do, JuDo, KenDo, etc. Budo started in China around 500 years B.C. when the Shaolin monks needed to defend the temples where Zen Buddhism was practiced. Budo literally meant “to defend the temple.” How did it evolve into the martial concept of conquest and destruction, starting in Asia and spreading later to the West? As Buddhism expanded throughout Asia, it eventually came to Japan along with the Budo. It then developed beyond its original purpose in a context of scarce resources, which needed to be conquered for the benefit of their clan starting around 900 A.D. The warrior caste of samurais was the military nobility in charge of waging wars. The kanji used for samurai is also Bushi where you find the original notion of guardian of the temple.

Budo means the way to perfectly stop an attack. For the samurais, this was a proactive concept involving justice, technique, and character. Bushido is how you apply the Budo, and it involves the notion of mission, such as a military campaign.

Aikido is also a Budo but additionally, it has a central focus on the development and control of Ki or the energy of life. Ki is an all-encompassing fundamental concept in Japanese culture. It is used in combination with other kanjis to describe concepts such as aggressiveness, health, having feelings, being aware, being intuitive, being humorous, being irritated, or fainting among others. The focus on Ki is not unique to Aikido but it allows us to expand the practice far beyond just martial techniques and the use of the physical body. Training and practicing Aikido means developing control of one’s Ki for harmonization. Therefore, Aikido techniques must lead to peace and not to destruction.

Most martial arts focus on attacking. Aikido focuses more on defending. Arts focused on attacking are simpler because attacking is simpler. Defending oneself, however, is very complex because it should address all possible attacks. This is why in Aikido we have so many techniques.

Winning for the samurai means killing the enemy and destroying any possibility of revenge by eliminating his family and stealing their possessions. Today, this concept is practically obsolete. Martial art competitions are very different indeed. A judge declares a winner and certain rules must be followed. This is a far cry from the objectives pursued by the samurais.

In the streets as well, there are no rules and there is no judge, thus there is no competition per se. Not even the type of weapons are predetermined. The police objective is to neutralize an attack and bring the attacker in front of a judge.

Aikido can be used effectively in that context by preserving our own safety and that of other people above all. So, we conclude that the concern with Aikido’s efficacy in non-competitive situations is not meaningful. In the real world, the only important thing left is the personal development resulting from the Aikido training. We also conclude that concern about Aikido’s efficacy in competitive situations is not useful either.

To come back to the concern about falling participation among young people in Aikido, we believe that the Budo, central to martial arts and with very strict standards, is very distant from the current educational context for most young people today. The liberal values in the educational system are flexible, democratic, and participative, and this trend is not new. The discomfort of training in a martial art, where respect to parents and teachers is central, must be a negative influence that is discouraging many young people from pursuing martial arts training. Some dojos are even adapting to this trend by avoiding the use of Japanese terms (not referring to the teacher as Sensei for example). 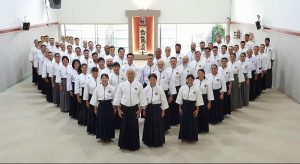 In the Maruyama dojos, we keep the Budo principles intact, and we have not seen a reduction in the number of young people training. We believe that innovating in the dojo by evolving traditional Aikido techniques as discussed above, and also by developing and better preparing our teachers, has helped in the retention of younger students as well.

We also believe that focusing on Aikido is important, and there is no need to become proficient in other parallel martial arts. It is more important to learn about human physiology (to avoid common Aikido injuries such as back injuries for example), human relationships (to learn how to connect with others), and philosophy (such as the study of O Sensei’s texts, which were influenced originally by Shintoism and later by Omotokio). It is important to consider what exists beyond pure technique, which is a primary focus of all martial arts.

We are grateful to Aikido Journal for its contribution to the Aikido Community.